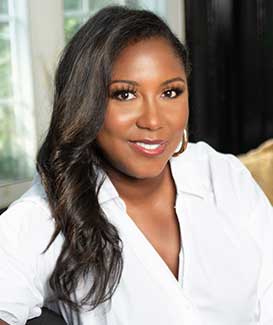 Jen Hayes Lee is a driven and thoughtful leader who pushes herself and those around her to dream big. After entering Emory College, Jen earned a coveted spot in the undergraduate BBA program at Goizueta Business School. From there, she maintained leadership roles with the Black Student Alliance and The Emory Wheel while pursuing a double concentration in Marketing and Business Communications. During her time at Emory, Jen joined Inroads and the American Association of Advertising Agencies MAIP summer internship programs at Colgate-Palmolive and Leo Burnett. After graduation, Jen’s journey continued to New York City in the Media industry working for Hearst, Disney/ABC and Complex Networks. Jen was later awarded an academic fellowship from The Consortium to attend NYU Stern Business School where she received an MBA in Marketing and Entrepreneurship. Thereafter, Jen took on leadership and strategy roles at Saks Fifth Avenue and The Knot Worldwide, settling in as Head of Marketing at The Bump. As the perpetual dreamer and doer, she recently joined the Son of a Saint Board of Directors, signed a book deal to embark on the world of children’s literature and is partnering with Emory on The Golden Hoop Project to raise awareness about breast cancer risk and the importance of genetic testing for young Black women. For Jen, Emory was foundational for turning her passion into impact.