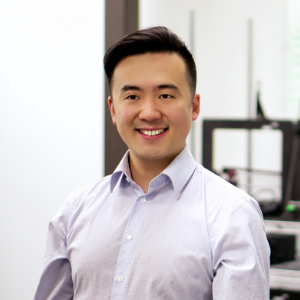 In his last year at Emory, David Wu 11BBA was well on the path to medical school. But after a conversation with a fellow student, he realized that he was more interested in the business of medicine.  After a few failed business attempts, Wu learned about the work of Steven Wolf, PT, PhD, professor of Physical Therapy in the Department of Rehabilitation Medicine at Emory  School of Medicine, and found his succesful venture, Motus Nova, which is Latin for “Movement Anew.” Through his research, Dr. Wolf found that stroke damage is not always permanent and that it is possible to rewire the neural functions through hours upon hours of repetitive motion. Inventors at another university created a functional exoskeleton for both the hand and the foot that is used in hospitals for a fraction of the cost of conventional rehab.

Right now, almost 200 hospitals use the technology, but Wu and his partners have taken it further and have developed the exoskeletons for home use with plans to disrupt what is currently a $50 billion-a-year business that affects more than seven million people. Just recently, the FDA approved the devices for sale directly to the user, and the Veterans Administration is considering a roll-out in their facilities on a national level. But, considering how many hours the rehabilitation takes and the mindless repetition, how does Wu keep the patient involved? With simple video games that are not only entertaining but also collect data from each patient’s in-person visit with their therapist—all at a fraction of the cost of conventional therapy.

Connect with David on LinkedIn, and visit Motus Nova's website.